Please note that this review contains spoilers and lots of ranting. 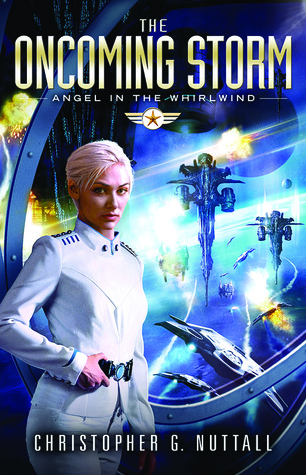 In the year 2420, war looms between the galaxy’s two most powerful empires: the tyrannical Theocracy and the protectionist Commonwealth. Caught in the middle sits the occupied outpost system Cadiz, where young officer and aristocrat Katherine “Kat” Falcone finds herself prematurely promoted at the behest of her powerful father. Against her own wishes, Kat is sent to command the Commonwealth navy’s newest warship, Lightning.

Determined to prove she has value beyond her family name, Kat struggles to earn her crew’s respect and find her footing as the youngest captain in naval history. She soon discovers the situation on Cadiz is even worse than anyone in power anticipated. War isn’t just a possibility—it is imminent. Yet the admiral in position to bolster defenses refuses to prepare for a fight. Can Kat find a way to investigate the enemy, alert the Commonwealth, and whip an entire fleet into fighting shape before the Theocracy’s war machine destroys everything she holds dear?

I requested this book on Netgalley because I thought it was going to be a fun romp – something to relax with after a day working in the library. “Military SF with a female lead” is basically a recipe for  my perfect popcorn book.

Kat Falcone is a newly promoted Captain, part of her planet’s aristocracy, about to take command of her first ship. Her posting is to a remote world; most people seem to think there’s no danger of fighting there but Kat’s not so sure. When she arrives, she finds her superior officer is horrifically incompetent and no one is ready for the invasion (by a fanatic, ideologically opposed interplanetary power with a generic-sounding name) which inevitably occurs.

Now replace “Kat Falcone” with “Honor Harrington” and see how much that sounds like a synopsis of On Basilisk Station.

All right, so the premise isn’t particularly original. Fine. It’s an engaging enough tale if told well, so I tried to let that go and evaluate the book on other criteria. Unfortunately that didn’t go particularly well either.

The writing is, frankly, sub-par. First, it’s repetitive: dialogue circles around to the same point two or three times in a conversation, and the exposition will say something only to have the same thought repeated a page or two on, or mentioned by a character in the next couple lines of dialogue.

“The story seems plausible,” Davidson said. “And we are well aware of the possibility that it is a trick. However, I honestly don’t see how they benefit.” (62%, one page later)

The captain cleared her throat, loudly. “They certainly don’t seem to benefit,” she agreed reluctantly. (62%, ON THE SAME PAGE)

Word choice is also repetitive – I stopped counting the number of times people “snapped” when speaking – and the title phrase “the oncoming storm” appears no fewer than three times in the book. It’s excessive, and it’s clumsy.

And then some of it is just dumb. I present the following excerpt without comment:

“And what,” William asked, “are you prepared to offer?”

“It depends on what you are prepared to offer,” Scott said.

There are characterization issues. (Warning, spoilers ahead). The XO’s smuggler brother plays a minor role in the plot. When William (the XO) goes to meet him, we find out that the brother lost a girlfriend to piracy and that’s why he became a smuggler. This point is repeated three times during his scene.

Then, a little ways onward, we get William contemplating his brother:

There was no avoiding the fact that he’d made his fortune smuggling everything from guns to farming equipment — and probably slaves.

Just…how?? You make a huge deal over the fact that his girlfriend was enslaved by pirates and he’s “never been the same” but then you think he’s involved in human trafficking??

And then there’s the sexism. Look, I’m not saying every book has to have the same type of woman; on the other hand this manuscript seems to bring up “traditional” gender roles an awful lot. Plus there are moments where the narrative – or Kat’s inner dialogue – is critical of a certain type of femininity. And maybe that’s a valid characterization – there are women like that in the world – but why? It’s unnecessary.

Not all of the individual lines I’m about to quote are too egregious on their own, but when they come with such frequency, I’m crying foul. (Warning: spoilers, and ranting)

A description of Kat (2%): “…drawing attention from everyone who looked at her. The black uniform…fitted her perfectly. But then, her body was perfect too.“ She’s pretty, and everyone knows it. And this gets brought up again and again.

But we, the audience, must immediately realize she’s not like other girls: “‘At least I’m not Candy,’ she thought, thankfully. Her older sister spent most of her life aping fashion…”

And then in the next paragraph a maid wears a dress “that left very little to the imagination” and Kat wishes she were wearing “something more classy”.

Later on, William thinks, of a young female navigator, “And she was pretty enough to get into a different kind of trouble on shore leave.” (12%)

At 27%, we get another reminder that Kat is pretty: “Even the genetic engineering that had shaped Kat’s appearance had given her something more natural.”

Back to William. At 36%, in conversation with young female Midshipwoman Parkinson (and note that nearly all the female navy personnel in this book are specifically called out as young, so they can be infantilized), we get this gem: “William felt his blood run cold. Out of the mouths of babes…”

Parkinson is IN THE NAVY. She’s an OFFICER. She may be young, but she’s a professional. Not a child.

At 41%, Kat’s father specifically notes that Kat and the Prince stopped spending time together because cooties: “The prince, like most boys before adolescence, had been more interested in spending time with his male friends.”

Kat goes to a party at 43%, and is definitely Not Like Other Girls ™: “Some of the dresses society butterflies had been known to wear in public barely covered anything. She was damned if she’d be talking to her fellow commanders while looking like a whore.” Nice.

At 47%, Kat is forced to wear a black cocktail dress to the Admiral’s party, because apparently he gets to dress her? Kat’s unhappy, but also notes that “She’d look good in it”, just in case we’d forgotten that she’s pretty.

At 49%, we go to the party and see that the other women are wearing the same dress (um, what?) but had “cut the dresses shorter to expose as much of their legs as they could without showing underwear” because slut shaming is always fun. To be fair, I think this bit is meant as an indictment of the admiral, not necessarily the women, but the text is still pretty derogatory.

And not even the old ladies are safe — Kat wants to slap one, because “She’d met far too many elderly women like her, women who saw themselves as anointed monitors of society.”

So all the women in this book are either young and pretty (or young and naive and pretty), or old and nagging.

At 57% we see William and Parkinson again; William gives her some “fatherly advice” and dismisses her, calling her a “Poor girl…All alone in the night”, which is both condescending and distractingly poetic.

At 60%, a rescued Theocratic princess — a victim of some truly horrific policies, who probably deserves pity — is called “alarmingly seductive”, and Kat dislikes her immediately because she’s “manipulative”. William worries that Kat feels “dowdy when compared to the princess”. Because that’s definitely #1 on Kat’s mind, not, you know, the impending war?

At 66%, Kat talks about the navy uniforms, noting that “They’d gone fore style — on the theory that every girl loved a spacer — and ignored some of the practicalities.” Which seems extremely unprofessional for a military, first of all, and second of all unnecessarily gendered.

At 76%, Davidson is marooned on a hostile planet but still feels the need to note that the farmer’s daughter is “pretty enough”. Then when he meets the female insurgent fighter, he wants to ask her why she joined the insurgency, a “question that had been nagging at him since he realized she was a girl.” That implies, of course, that if she were a man the question wouldn’t be nagging…and why should a woman’s motivations to protect her planet/resist invasion be any different than a man’s?

Kat tells herself to “stop whining, you stupid bitch” (80%) because why not, and then looks in the mirror to note that she “looked awful, despite the genetic engineering” because we might have forgotten she’s pretty.

And you know what? I’m done. The story is unoriginal, the writing’s crap, and the misogyny is pervasive. It’s just not good enough of a book for me to bother with the rest of the series, and it’s put me off the author entirely.

I received a copy of this book from the publisher via NetGalley in exchange for an honest review.

2 thoughts on “Review: The Oncoming Storm”